May 24, 2020
Everyone has life changing moments, good or bad, that act as forks in the road. After the event, nothing is the same as before. I'll never forget the day my parents announced they were splitting up even though I had very little understanding of what was going on. I'll never forget meeting my wife; where I was on 9/11 (Paris); getting my first job offer; missing out on a job I wanted; finding out I was going to be a dad (of twins). Some moments are bigger than others. Some of them are expected and some appear out of nowhere.
My brother just had a life changing event. His company is being bought by a larger company and he will make loads of money. I have a tinge of jealousy because he is set for life, but he's always been successful and generous so my jealousy is quickly gone. My family has been lucky in that our life changing events have been mostly positive.
What's strange about the pandemic is it's a drawn out we-never-know-when-it-will-end life changing event. It&…
Post a Comment
Read more

When Reality Gets Bent

May 20, 2020
I remember reading a nonfiction book by Michael Crichton called Travels; Crichton describes being in some odd situation where people were learning to bend spoons with their minds. There's every reason to be skeptical of this and yet Crichton was a credible witness and there have been many reports (seemingly credible) of this phenomenon. It makes one question reality. Are we in the real world or in The Matrix?
Some days the pandemic still seems unreal. The invisible threat.
Parts of the stock market also seem unreal as entire sectors have rocketed back to all-time highs while other sectors are on the brink of bankruptcy or nationalization. Many of the winners are paradigm shift stocks that I think of as "new tech."
And then, there are stocks like Moderna (MRNA). I first bought MRNA in January 2019 at $14. It was doing fine and then it drew the pole position in the race for a Covid vaccine and it went parabolic. In late February it was still around $18 and just a couple days…
Post a Comment
Read more

When I started this blog it was late March and the heavy virus-related restrictions were just starting to gain steam. Here we are 2 months later and the restrictions are still in place, in some cases easing slightly, in some cases turning into a disturbing new normal.
The civil policies are debatable to say the least.
Catch-22 Stalemate
I remember thinking in March that if we could get through the first wave of the disease then there would be a clearer trajectory for the crisis (positive or negative), thus providing a clearer signal for decision making (wait it out or take some sort of action).
Is the trajectory clear now? It does appear that the worst case scenario is off the table. Hospitals in many areas are not overwhelmed (in fact, they are suffering as staff are being furloughed due to a lack of procedures/business.)
But the best case scenario--back to normal by summer--is also off the table. In major cities, parks are still closed, summer camps canceled, and we wear masks in publ…
Post a Comment
Read more

Technology Is No Longer A Sector 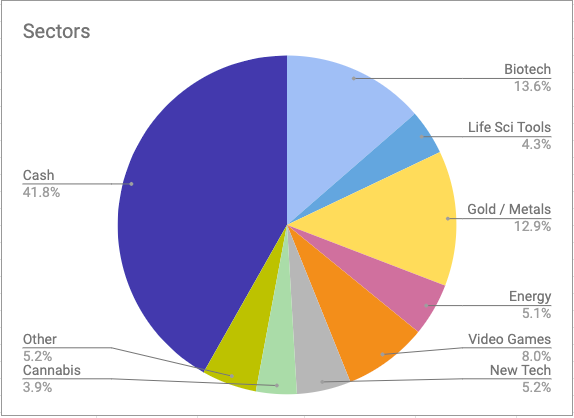 I'm finding this to be a very difficult phase in the stock market. The rally is churning between S&P 2800-2950. On a daily basis stocks are gyrating up and down but the net effect for the indices is a nothing burger for nearly a month. My option hedges did not work very well because I've been anticipating a move up or down rather than a sideways grind. For the most part options are a loser's game unless you're a math whiz or professional trader. If all this makes no sense to you -- it's for the best, carry on.
Probably a good lesson for the future is to hedge by building cash rather than buying options, which suffer from time decay in a stagnant market. Cash is great when you're uncertain and doesn't hurt you if markets sit.
Ugly Valuations
Overall equity valuations are nose bleed. Apple has a 1.34 Trillion dollar market cap with a P/E of 24 and flat to negative revenue and earnings growth. I don't think a company that size can grow at a rate to just…
Post a Comment
Read more

Ready For A Volatile Week

May 04, 2020
Ok, so we are back in our apartment and it's going to be a heckuva week. My wife is returning to work this week and I'll be teaching 2nd Grade solo. It's not the material; I can do spelling and subtraction. It's that my twin boys have always been in separate classes by design, because when they are together they are either extremely combative (competitive, annoying, and so on) or super cooperative (to the point of uncontrollable laughter). There is not much middle ground with them.
My theme for the week is "independent learning" so we will see how that goes. My goal is to be stoic no matter the volatility I'll be faced with.
Also, I think the stock market will be equally volatile and challenging, more on that later.
Diverse Answers To The Virus Can Make Sense
We were in the country for more than a month and I can see how there are many perspectives on the virus and the reaction to the virus. Out in the country, people are respecting social distance an…
Post a Comment
Read more 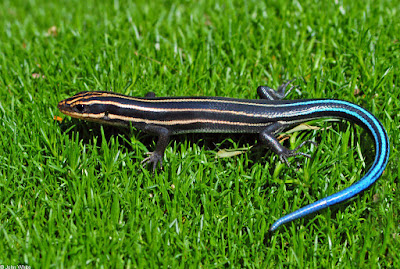 Kids are funny and incredibly annoying.

It's truly a skill to take a step back during the crazy moments and laugh or smirk or resist correction. I try to picture certain scenes as home movies that I'm watching as an old man. Thinking of it from the perspective of my future self helps me notice the humor in it all. I don't always succeed -- in fact I rarely succeed -- but meditating on the home movie concept is helpful.

Some random moments from the past few days with my twin 8 year old boys:

Boy putting small lizards in his hair and in his ear and in his brother's pants.Boy walking in a lake trying to catch fish with a net.Boy running around naked.Boy putting all the toppings on his burger -- cheese, ketchup, mustard, jalapenos, lettuce.Boy getting a homemade haircut that turned into a mohawk.Boy learning to make his own lunch.Boy watching Harry Potter and calling the bad guy "Baltimore".Boy wrestling with brother, teasing brother, hitting …
Post a Comment
Read more

The Only Thing Harder Than Change Is No Change

April 27, 2020
There are a lot of self-help and management books about dealing with change. Some humans find "change" very difficult, whether it's moving to a different state or changing jobs or reorganizing a business unit. And there's always a given assumption: change is hard.

But what about no change?
I could be wrong but not as much is written about monotony, or the lack of change. Whenever the subject of monotony comes up, the advice probably centers around ... change. Feeling stuck? Make a change! Unhappy with some part of your live? Change it for the better!
It strikes me that the lack of change might be even more difficult than change. Think of situations where change is severely limited: prison, immobility, a dead end job ... a pandemic shelter in place.
My family enjoys change. Travel, new restaurants with new foods, a variety of activities. These are the things we miss while sheltering in place. We've almost resisted roots by design. We live in a small apartment and…
Post a Comment
Read more 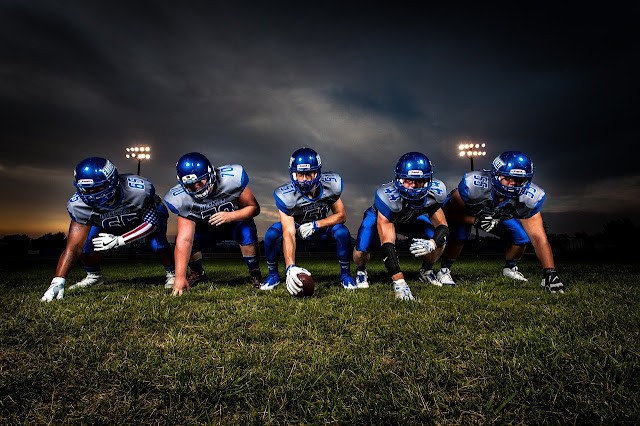 The Virus has canceled sports and that truly sucks. I've been missing the Premier League and the Champions League and the NBA Playoffs. I've also missed watching my kids get their energy out playing soccer. Thankfully, tonight is the NFL draft and I'll probably watch every minute just to get a glimpse of the sporting world again.
I was daydreaming about the draft while looking at my investment portfolio and it struck me that building a good portfolio is like building a solid team. I want good performers of course, but I also want the players to work together in a way that makes sense. In some ways the team can be stronger than the individual pieces. I never really understood this until recently, as I've had more time to review and update my financial spreadsheets.


Focus and Diversity Some people like passive index investing and I own indices in some accounts, but I really enjoy actively managing stocks. What I like about an active portfolio is I don't need to inve…
Post a Comment
Read more 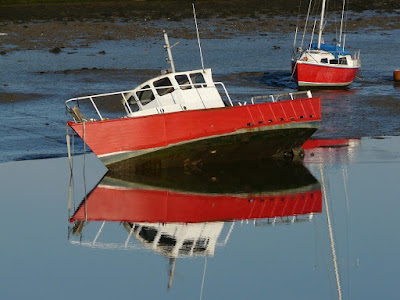 Warren Buffett has this great quote: “It's only when the tide goes out that you learn who's been swimming naked.”

When times are good, people and companies float along effortlessly and everyone seems to do well. Hence the saying, "A rising tide lifts all boats."

When times are tough, we start to see winners and losers. People who overspent on cars and houses suddenly lose income and they might be unprepared with no savings, vulnerable, naked. The same goes for companies. Companies that relied on unsustainable business practices suddenly lose revenue and can't service their debt, can't buy back their stock, can't maintain (artificial) growth.

This is a crisis right now and the tide is out.

Trying To Navigate The Ups And Downs

April 16, 2020
The Corona Crisis will have peaks and valleys and it's difficult for the inner self to keep up. Just when one accepts the current phase of the crisis, a new phase begins and crisis response also begins anew, shaking off any complacency / peace / zen previously and tenuously gained.

I've sort of mentally adjusted to the next several weeks of no school, sporadic work, uncertainty. But now summer is approaching and trips are being cancelled, camp is in question, work is an unknown.

The kids are understandably out of sorts. There are certainly positives to a simpler life without all the modern structures and activities. BUT. An activity like soccer practice was really good for them -- they worked hard, exercised, learned, interacted with other kids. We're feeling the loss.

Will summer be a new season or just a continuation of virus avoidance? And then, what about next fall and winter? Will there be a viral second wave?

Is there a light at the end of the tunnel, or is that an o…
Post a Comment
Read more
More posts